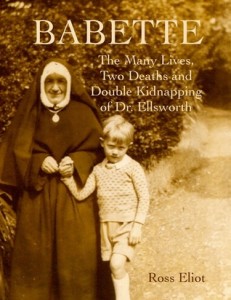 “The writing style for a debut book is amazing.”

“Original, unique, complex, this book deserves to be in every home library so it may be read and reread.”

“Wonderful characterization. Vivid setting. Interesting plot. And writing that drew me in from the very first page. A wonderful read!”

– literary judges for the 2014 Rainbow Awards

This narrative begins in 1998 when, during his early twenties, Ross Eliot relocated to Portland, Oregon and eventually moved into the pantry of a grand house owned by Dr. Babette Ellsworth, an arcane history professor.

Her strange life unfolded in stories, about the 1928 central Washington kidnapping carried out by a mysterious French woman, life in occupied Europe during World War II, the assassin of Rasputin who was a family friend, East Indian soldiers who fought for Nazi Germany and trips to the compound of Bhagwan Shree Rajneesh, whose cult perpetrated a 1984 bio-terror attack in Oregon.

Between international travels with Dr. Ellsworth, Eliot encountered many unusual people within Portland’s diverse subcultures. These relationships led to dance parties at historical monuments, Scrabble games with a nocturnal jazzpunk and perilous adventures involving a beautiful sex scam artist. Eliot cared for his professor through her tragic final death in 2002, yet the layers of Babette’s story were only partially revealed. Unable to stop exploring her story, he afterward delved deeper into Dr. Ellsworth’s complicated lives, exposing murkier secrets than ever suspected. From gender and sexuality to religious theory and existential philosophy, it’s an unorthodox love saga between pupil and mentor, yet also an ode for the city of Portland where they lived.